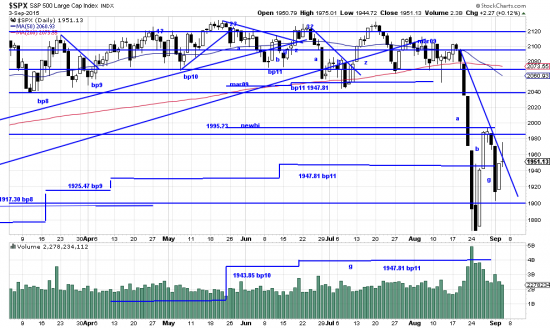 The process of analysis is a constant search for something which is understandable.  Is this the beginning of a serious downtrend or is it an extension of the congestion zone which lasted for 8 or 9 months?  At the moment  it looks like it is in an A-B-C (a-b-g) wave which would argue for an understandable correction, not the beginning of a bear market.  We are in the middle of that pattern in the middle of what might be a zeta wave.  Not to test the low would be bullish as we see it and the gamma wave appears to be arrested.

But today returned quizzical information — or fizzical as the advance fizzled.  Ordinarily one would buy the penetration of the downtrend line, but with this ambiguous behavior you have to hesitate.  At the moment we are inclined to view the entire adventure as a lamentable correction, not as a major trend change.

As always you never know till later.