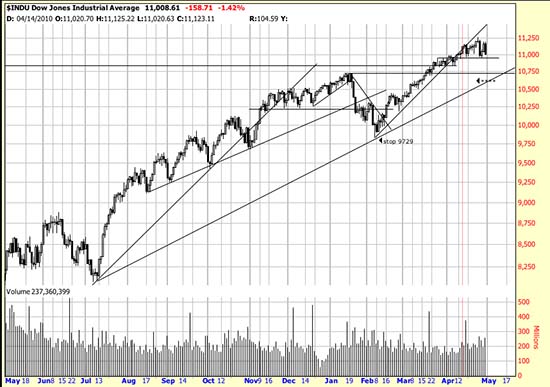 Friday we put on a partial hedge as an inept response to the present market.  We’ll probably get egg on our face and be proven impatient again.  But here is why.  As you see from the Indu chart here there is a broken short term trend line.  Now, in all likelihood this is the beginning of a sideways pattern and the thing for long term traders is just to sit and grin and bear it.  Always itchy we looked at 12 ETFs tha we follow on a regular basis and found not one buyable at this time and all of them with broken short term trendlines.  The nearest to buying was the IWM, the Russell 2000, and we wouldn’t even buy it at this point.  (We should have bought it long ago.)

In fact we saw some of them looking like possible short candidates — FXI (China) EEB (BRIC) and MOO.  Some other ETFs we looked at we charted and posted on a link at the edwards-magee google group.

There is always a consequence to a broken trend line — either a downwave or a sidewave.  And the upwave we see ending with this break in the indices is unusually long — 53 days to April 23, and 4 days of sideways.  For perspective the impressive power wave off the bottom March 09 was 45 days on the first leg.  You will also see that the pattern we remarked on awhile back is manifesting itself again — then it was surge-drift-flush.  Now it is creep-drift-creep.  The present pattern has picked up the volatility, indicating that contrarian interests are shorting and selling.  This behavior sets up battlegrounds.  Good long term investors trading with the Magee Basing Points Procedure watch this with interest but do not participate.  Do as we say, not as we do.

As for GLD we have buy signals of which we are suspicious, but we bought some anyway.  Of course we have been long gold since forever, and just watched it spin in circles for sometime.  But it will have to clear the old highs before we believe it.  And what we believe is that the Treasury and world banks will naked short it to keep it from becoming an issue.  Until the dam breaks.

And, remember what our old mentor used to say, which we ignore on a regular basis:  Never be in a hurry to do something stupid.