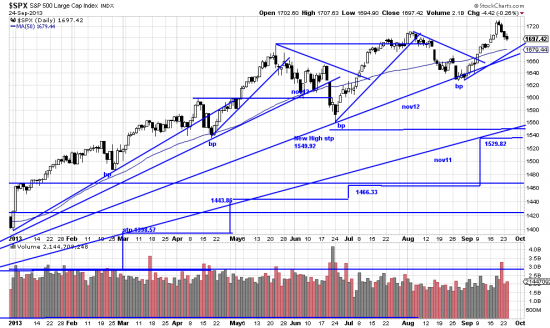 Whim, caprice and vagary — the three horsemen of the Apocalypse, riding roughshod over the market.  And over Washington.  Barely had the market luxuriated in the shower of Helicopter Ben’s  cash  than the market goblin whispered in traders’ ears “Don’t forget about the budget crisis… and the debt ceiling crisis… and Ted Cruz and Rand Paul….and the government shutdown…and…”

So they canceled the breakout and caused whiplash — not a time to be adding on.  Time to buckle seat belts and get ready for  volatility.  We put on a partial hedge.  If your instincts and analysis set your teeth on edge this is extremely simple — you just buy the inverse or short ETF — in the case of the SPX the SPXU (3x short) SH (unleveraged).  DOG for the Dow.  And although we  rarely mention it because some sophistication is involved there are puts.  We think that   outbreaks of whim caprice and vagary are likely through October — and of course there is always the ghost of October 19 stalking the market.

On the chart above the highest trendline is really of little use and largely cobbled together — because there is not a good downwave point.  But it bears watching anyway, as does the trendline from nov12.  This line held the last downwave, but suicide bombers were not throwing bombs in the Whorehouse of Representatives at that time.

Withal, the structure of the market is still positive — higher highs and higher lows.  Stay alert.  The next few weeks should be interesting.

(Old Chinese curse:  May you live in interesting times.)