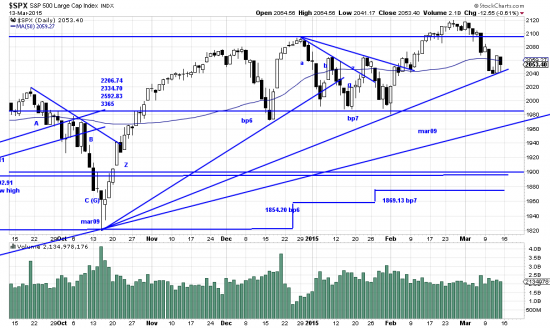 In this one chart we see three reactions to sharp sell-offs — formations we have called alph-beta-gamma-zeta waves.  These are proving to have a great deal of mutability. The October formation rocketed off the bottom after a thinly analyzed B wave and the money was free for the taking and that was obvious at the time.  The December formation was a straight out V wave, feeling no need for B or G waves.  The January formation turned and twisted and made every effort to escape analysis, but eventually proved to have two B waves and two G waves.  When the Z wave started it was easy money — but earned with blood and tears.

Which brings us to the present greased pig.  Thursday we thought the train was leaving.  Wrong.  It just allowed us to get on the tracks and then backed up over us on Friday.  Such are the joys of chasing greased pigs — or greased trains.  Now we must wait to see whether the explosive day up belongs to the A wave, or whether Friday belongs to the B wave.  Such are the joys of the Greek alphabet.  Ancient Greek.  Demotic Greek and demotic Greece looking like it’s (are) sliding to Byzantium.

But note the not so obvious fact of the chart:  higher highs and higher lows.  Even as the wave is gnarly and trying at times.  Also note that the bull market is alive and when it shows signs of dying we will be the first to hop  on the bear train.  (Greased bear, for sure.)

As difficult as it might be the pig always winds up as bacon.

Mutual funds: the gift that keeps on taking….

At last they’re here! The dog days of August….